This is a recollection of an exchange between a customer and Miss Caroline Cowley. The newspaper cutting (date and publication unknown) was sent to me by Gill Cowley. 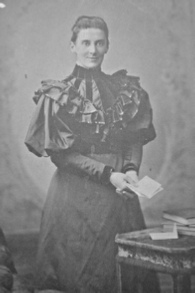 This booklet is from a lovely blog site designed by Kristen Bailey. Kristen had found the card being used as a bookmark in a charity shop paperback book and rescued it.

Images of a paper booklet for 'Cowley - Fancy Bread and Biscuit Maker, 9 Pool Valley, Brighton’ - from The Royal Pavilion and Museums, Brighton & Hove. The booklet apparently shows the variety of different breads and biscuits made by the Cowley bakery.

In 2009 I was contacted by Gill Cowley. Gill told me that her father-in-law, Vernon Cowley who was a master baker in Newhaven,

remembered an ‘aunt’ who had a bakery in Brighton and that he recalled a story about a tunnel from the bakery in Pool Valley to the Royal Pavilion which was used to “take cakes to visiting royals”.  Gill has kindly sent me a newspaper cutting (date and publication unknown) which Vernon has kept and which confirms the existence of the tunnel.  It is also interesting to note the suggestion that the original buildings were established to serve as the bakery for the Royal Pavilion.

For clarity the original cutting has been split in to two separate images.

Click on the link above to read the full details from the V&A web site.

This photograph was taken during my visit to Brighton in 2012 and thankfully shows the ‘Bunn Shoppe’ in course of restoration to its former glory.  The brick tiles had yet to be replaced.

The building has now been re-let for commercial use. 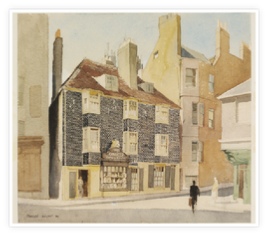 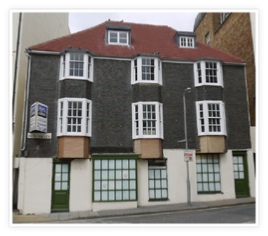 I found this postcard after my father died in 2003.  It was sent to him by his father, Charles Leonard Cowley, on 3rd August 1939. Grandfather writes: “Take care of this card, no more obtainable”.

This card is postmarked 5 July 1956 and was sent to an address in Forest Hill, London. The final sentence reads, rather strangely - “This picture is not to be confused with the Labour Exchange”.

This detail is from an article published in the Brighton newspaper, ‘The Argus’, and shows the sad state of the building despite it being listed as Grade II* by English Heritage for its architectural and historical importance.  Click on the image to read the full article.  (This is split in to 3 parts to aid display and reading.) 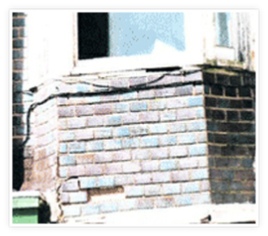 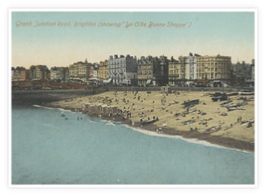 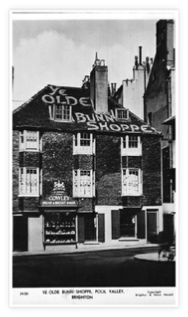 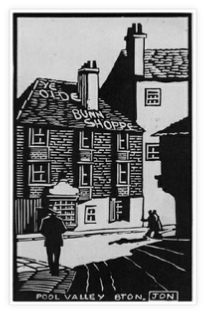 These two prints showing “Ye Olde Bunn Shoppe” are believed to date from the 1930s.

This photograph also dates from around 1900 showing the front of the “Cowley Bread and Biscuit Baker” shop.  A man in baker’s uniform is standing to the left hand side of the shop behind the Cowley handcart.

This black and white photographic print dates from ca 1900 showing Pool Valley, Brighton.  It is a posed view of a family with ‘Ye Olde Bunn Shoppe’ visible in the background. 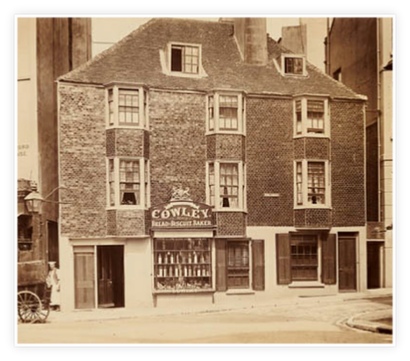 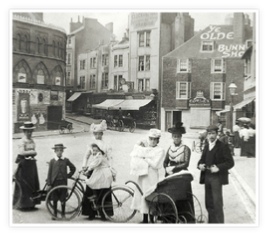 The pictures below provide a fascinating pictorial history of “Ye Olde Bunn Shoppe” during the course of the last 100+ years.  The first four photographs, the postcard of the sea front, and the images of the Cowley ‘booklet’ are from the collections at The Royal Pavilion and Museums, Brighton & Hove and are reproduced here with their kind permission.

Early in my family history research I discovered that my  great, great grandfather, Francis Cowley (b abt 1806), was a baker in Brighton.  In the 1841 and 1851 censuses he was trading at 9, Prince Albert Street.  Paul Jordan at Brighton History Centre has also found a listing in an 1845 Brighton street directory with this same address.  In the same directory a ‘Sarah Streeter’ was listed as a ‘bread & biscuit maker' at 9 Pool Lane (later Pool Valley). 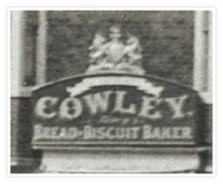 Several of the photographs of 9/10, Pool Valley show a Royal Crest above the Cowley name.

The Royal Warrant Holders Association has confirmed that Miss Caroline Cowley held a Royal Warrant of Appointment from HM King Edward VII.  It is thought that the Warrant dates from 1908 as Caroline joined the Association on 10th October of that year.  According to the 1912 Register, the ‘Board of Green Cloth’ (supervising Warrants) gave Caroline permission to continue using the Royal Arms after the death of King Edward VII in 1910.  It is not clear why this dispensation was granted.  Caroline eventually resigned her membership on 5th October 1921 when the dispensation came to an end.

From the Melville’s Directory advertisement above it would seem possible that Francis Cowley may also have held a Royal Warrant but this will need further research to confirm.

Thanks to the power of the internet my knowledge of the the history of the Cowley Bakery just keeps on growing.  But none of this would be possible without the enormous interest and contributions of the many people who have contacted me.

Particular thanks go to -

Michael Beard, Editor & Bill Gardner, Reporter at The Argus for permission to reproduce the article from The Argus

"Here you have a genuine bit of old Brighton, in the quaint bun-shop, which from time immemorial has been known as "Streeter's."  Cannot I recall the particulalry toothsome square sugary bun - it was a sort of aesthetic Bath-bun, if my recollection serves me - and the crisp "parliament" they used to sell at this establishment?  The place is not the least changed.  Young people have told me that the buns are still toothsome and the parliament still crisp.  I am glad that there is something which still remains unchanged here."

"At No. 9 is an establishment reminding those of us who are in the sere and yellow leaf of Brighton's early days, and whose fame stands as high as ever.  We refer to the bakery and confectionery shop carried on by Miss Cowley, which was famous when the Pavilion was a Royal residence.  Notwhithstanding the age of the business it has kept thoroughly abreast of the times, and is up to date in all other respects.  The house is chiefly noted for biscuits, which are to this day made on the premises by hand.  Many and various are their shapes and flavours, and wholesomeness and delicacy in taste are combined in an eminent degree."