The Marshall Family in Shrewsbury

Research shows that the family was living in Chester from at least 1886 until 1890, and in Wrexham in 1896.  At some time between 1896 and 1899 (the year in which William Henry’s death is recorded in Shrewsbury) the family moved to Shrewsbury.  In 1901 Caroline Ellen married John Elford Gulley (his third marriage) and in the 1901 census they are shown as living at 18, Castle Gates, Shrewsbury with Caroline’s children Lionel, Cecil, Ellen, and Carrie, and her step-daughter Beatrice. Caroline’s occupation is shown in the census as ‘hotel keeper’, although in later documents she is recorded as a ‘hotel keeper and confectioner’.

Caroline died in 1925.  In her will she left her pianoforte to her daughter, Ellen.  To her daughter Carrie Marshall and her step-daughter, Beatrice Hulley, she gave - “in equal shares the leasehold business in which I am now trading.  Also the furniture china and utensils necessary to carry on the business together with what cash I have in the bank and any other monies due to me.  In the event of the aforesaid Beatrice Hulley leaving the above business the whole of the estate and effects with the exception of the aforesaid pianoforte will become the property of my daughter Carrie Marshall”.  Her estate was valued at £481 5s 0d - around £14,400 at 2011 value.

The business that Caroline established and ran with the aid of her daughters was ‘Marshall’s Temperance Hotel’, later known as just ‘Marshall’s Hotel’.  After Caroline’s death Carrie and Beatrice (widowed in about 1923) continued to run the hotel until Beatrice died in 1964.  Carrie moved to a small flat in Shrewsbury and subsequently to sheltered accommodation.  She died in 1982.

However, recent finds on the internet suggest that ‘Marshall’s Temperance Hotel’ was not an unqualified business success for Caroline. An entry in The London Gazette dated 26 May 1911 - ‘Notice of Intended Dividends’ - lists Caroline as a debtor and describes her as ‘Temperance Hotel Proprietress and Confectioner (married woman, the wife of John Elford Gulley, carrying on business separate and apart from her husband in respect of her separate estate)”. A ‘trustee’ is named in the document, ‘Frank Cariss, Official Receiver’.

Caroline’s name appears again in the London Gazette on 4 August 1914 under ‘Applications for Debtors’ Discharge’. The court hearing was fixed for 12 noon on 12 October 1914. The business did continue so we must assume that Caroline managed to rescue her finances. 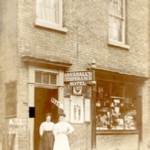 The earliest photograph of Marshall’s Temperance Hotel is from my family collection and taken, I believe, around 1900.  The two ladies standing in the doorway are unnamed but, I think, likely to be Caroline Ellen Gulley (L) and Ellen Marshall (R).  The shop window houses a display of confectionery.

On first look I wondered whether the photograph was actually of 18, Castle Gates as the building shows no signs of the mock Tudor frontage that is on the building today.  However, at the left hand lower edge of the photograph one can see the start of some railings. The building to the left of the hotel was a Congregational Chapel, built ca 1844.  (The ground floor is now converted to modern shop fronts, the entrance portico has been taken away, but the original stonework to the first floor has remained.) 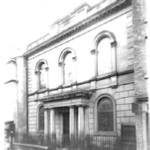 An 1882 town plan of Shrewsbury shows that the front of the Chapel was set back from the fronts of the buildings on either side. A photograph of the Chapel that I have found recently in the Shropshire Archives (reproduced here with their kind permission) shows the start of the left hand side of the hotel exactly as in my photograph, and also shows the railings alongside the footpath.

Research by  the Historic Environment Section at Shropshire Council suggests that the front of 18, Castle Gates, and possibly also number 19, were demolished and rebuilt in the early 1900s perhaps to accommodate widening of the road.  The building is now Grade II listed.  Click here to read the full details of the listing on the Historic England web site. 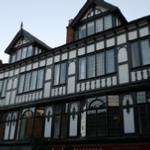 Occupying the first, second and third floors, 18, Castle Gates was, in recent times, still in use as bed and breakfast accommodation, known as the Lucroft Hotel. The proprietors had progressively upgraded the rooms to provide modern, comfortable facilities. 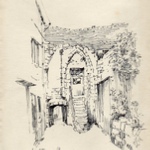 I came across this sketch of The Old Mint in Shrewsbury whilst going through a box of old family photographs and papers. The drawing is in ink on a sheet of Marshall's Hotel headed notepaper. Sadly there is no indication of who the artist was.

A Few Memories of ‘The Gates’

Marshall's Hotel was always affectionately referred to in the family as ‘The Gates’.

I well remember visiting the hotel as a child with my parents. Auntie Beat was usually in the small private sitting room whilst Auntie Carrie would be in the kitchen, usually surrounded by stray cats! Auntie Carrie always drank cold tea with the milk floating on top basically because she would make tea for everyone and be so busy preparing food that she would forget to drink her own cup. It was a habit that never left her.

Several of the Cowley women and children were ‘evacuated’ from the Midlands to Marshall’s Hotel at the outbreak of the second World War although I believe that they didn’t stay there for very long. I’m sure that it wouldn’t have been the hospitality and Aunt Carrie's good food that made them leave - just the desire to return to their own homes.

I am indebted to Penny Ward at the Historic Environment Section of Shropshire Council for her help in researching the architectural changes to 18, Castle Gates.

I am also most grateful to Shropshire Archives for their kind permission for the reproduction of the photograph of the Congregational Chapel - image reference PH/S/13/C/4, negative no: B2305.