Alfred James Bagnall was born in 1872  in Ogley Hay, Staffordshire.  In 1886 he was apprenticed for five years to Alfred Baker, a ‘Draper and Clothier’ in Chasetown, Staffordshire.  He married Edith Annie Windram in 1898 and, in the 1901 census, they are living in Leicester with Alfred working as a Commercial Traveller.  By 1911 Alfred had established the business of Bagnall & Co. - ‘Wholesale Warehousemen’ - in Charnwood Street, Leicester.   In 1920 he bought the shops at nos. 216 & 218, Charnwood Street for £700.  The shop had wonderful solid wood counters and all the stock was kept in neatly labelled drawers.  Every item had a hand written price label on which there was not only the selling price but also the purchase price written in code!  Alfred used the phrase ‘KING ALFRED’ to represent the numbers 0 to 9 so, for example, a purchase price of 1s/6d would be shown as ‘I/F’.  The shop sold everything from linoleum to ladies’ bloomers. Alfred’s brother, Albert, was a partner in the business but I do not know whether he was one of the founders or joined at a later date.

In about 1911 Alfred and his wife bought a house in Evington, Leicester - ‘Meadowcroft’ - where he lived until his death in 1964.  I remember the house well from the many visits there when I was young.  There was a huge garden, a kitchen garden, a paddock, a stable and coach house (which was latterly used as a garage), and a large orchard.  Alfred used to travel the three miles or so from home to the shop in a pony and trap.  My mother remembered the pony, ‘Sammy’, and his dislike of vehicles such as steam rollers.  Any encounter which such a monster would cause Sammy to stop dead and stand upright in the shafts.  Grandfather would be hanging on for grim death wielding the whip and trying to regain control!  At the rear of the shop, with an entrance from Preston Street, was a yard where Sammy would pass the day until the return journey to Evington. 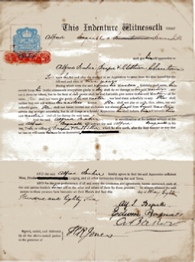 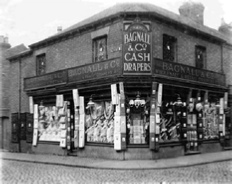 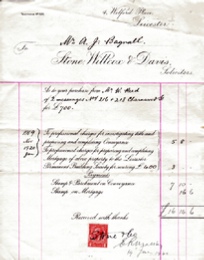 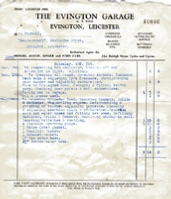 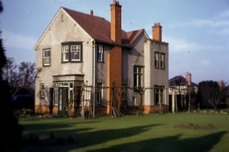 Sign from interior of shop - beaten copper on wooden mount.

The home of Alfred James Bagnall. 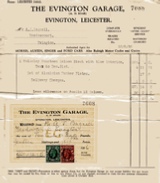 The business flourished and was actually still going when Alfred died although, by that time, Leicester’s main shopping centre had moved away from the Charnwood Street area and trade was suffering.  The business was closed immediately after Alfred’s death and the shops, subject to a compulsory purchase order for redevelopment of the area, were eventually sold to Leicester City Council. 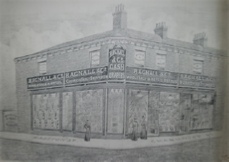